If this were a film poster, it would be about one man’s struggle to make himself heard in 140 characters. PHPI reports.

There’s every chance you’ve never heard of Marcus Butler, Zoe Sugg or Caspar Lee and yet they’re among the most recognisable faces in Britain to a particular demographic. In broad terms – and without wishing to sound too much like an old man who doesn’t understand anything that happened after 1996 – they’re social media celebs, collecting millions of followers across various channels (largely on the back of some prolific vlogging over the last decade).

If you use social media (and Twitter in particular) in a professional capacity, you’ll probably be aware that our industry has its own core selection of (relative) celebrities. The likes of @gasmangod, @PRHullLtd and @pbplumber have followers in their thousands, and their ethos goes way beyond tweeting for the sake of it. Think of them this way… if Stan Lee had decided to use the heating and plumbing universe as a home for his creations, this is probably what he would’ve conjured up – a disparate group of installers using their powers for good, shining a light on shoddy work and dispensing help and advice to those in need. It’s all done in a friendly and humorous way without ever being patronising, and they’ve tackled some pretty serious issues within the installation community. 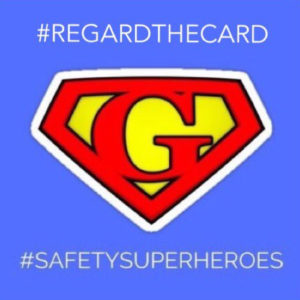 Truth be told, they didn’t even need Stan Lee – they set up their own #safetysuperheroes campaign (in conjunction with @Thisis_CT, read all about it as gassafetysuperheroes.com) to coincide with Gas Safety Week, asking consumers to #regardthecard and encouraging people to sign a petition to improve policies, procedures and legal requirements associated with gas safety (details are on the website).

The power of social media, even within the confines of a niche sector such as ours, was brought to the fore by a recent Twitter poll from Peter Booth (aka @pbplumber). The question was a simple one you’ve probably asked yourself many a time: when you call a boiler manufacturer, would you like the technical advisor to take your number so they can call you back if disconnected?

Peter explains what led to the poll: “I called a boiler manufacturer and had been on hold for 14 minutes before I got put through to an advisor. 10 minutes later, I was mid fault-finding on the boiler, had cables disconnected and felt I was finally getting to the cause of the problem when the line dropped out.

“I waited, hoping for a call back, but nothing. Then I had to ring back – I was on hold for 20 minutes this time – and then start the fault-finding from scratch with a new advisor. It was so frustrating and put time onto the job – which is bad for me at this time of year, and bad for the customer who is paying for my time. 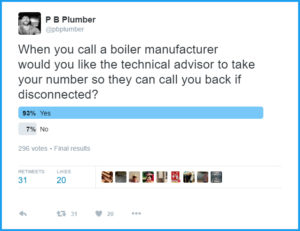 “So it gave me the idea to use my Twitter influence to try to make a change that would benefit us all and I think, with the help of my brilliant followers, I have achieved that.”

In a year of voting close calls, this was an absolute landslide. 93% of people said ‘yes’, and we can’t begin to fathom why 7% said ‘no’. Surely there’s no harm in being asked, just don’t tell them!

The point here isn’t so much that the poll indicated a need for this to happen, it’s more about how quickly some manufacturers took it on board. Viessmann and Baxi implemented the policy with immediate effect, while a number of others agreed to make their technical teams aware.

Social media sites are all too often slated for being either a platform for the planet’s less savoury elements or simply a fantastic way to waste time. Both of these things are undoubtedly true but, if you dig around in the right corners of the internet, you might just find some powerful allies.