PHPI reports on its latest Discovery.

Are you currently in the market for a shiny new van with all the very latest mod cons? Maybe a mighty pick-up truck has taken your fancy? Well, hold your workhorses for just a moment. It may have escaped your attention (and we have to confess that until a few weeks ago it had largely escaped ours too) but there is actually a third commercial vehicle option which could turn some previously well-intentioned conventions on their head. Like the best things in life, of course, it comes at a pretty hefty premium, but let us take you on a voyage of Discovery.

Not exactly going for a song, but certainly all singing and dancing, the affectionately abbreviated “Disco” Discovery Commercial from Land Rover is much more sophisticated nightclub than the sweaty church hall of your youth (or at least ours). Expect to pay a not insignificant entrance fee but what you get from then on in is a heady cocktail mix of what has made the Discovery one of the biggest noises in family SUVs for more than 30 years.

In many ways it seems almost a sacrilege to turn it in to a van but clearly the company is confident that there are sufficient customers out there who value driving creature comforts and top end performance over pure load carrying capacity (748kg payload). In fact, its claimed that one in four Discovery models sold in the UK is a commercial, which basically comes without rear seats, which are replaced by a hard-wearing load area and heavily tinted windows.

There’s some clever technology on hand to maximise grip for a variety of different surfaces and terrains and, with a permanent four-wheel drive with high and low range gearing, you would be hard pressed to find a typical UK scenario where it could get stuck. At the very rear, the load area is accessed by a powered tailgate operated via the key fob or by pressing a button in the rear number plates. Opened, it provides a handy backstop to items falling out and can double as a seat. 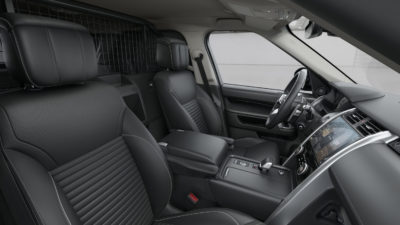 It’s fair to say that there is nothing else quite like it currently on the market… which can be interpreted in a number of ways, of course. Up front, as you would expect, there is an impressive level of Discovery standard car equipment with a new enhanced centre console with Pivi Pro 11.4in. HD infotainment touchscreen and intelligent seat fold technology to maximise driver comfort. The Disco is available exclusively in SE and HSE specifications, powered by Land Rover’s latest in line six-cylinder Ingenium petrol and diesel engines with 48V mild hybrid electric vehicle (MHEV) technology, which has all the required thrust to get from 0 to 60 in 6.5 seconds and cope with 3,500kg of towing capacity. Unfortunately, the weight and modifications limit it to legal van speeds, so that’s 60mph on a dual carriageway, although spotting the subtle differences would test the observation levels of even the most zealous traffic cop.

If that doesn’t quite hit all the right notes (and, with a starting price of more than £50,000, that’s financial ones as well) for your particular business, then Land Rover believes it has a hit on its hands with the newly rereleased Defender Hard Top. The name dates all the way back to the 1950 original and is well worth a spin for anyone looking for impressive off-road capability, long haul comfort, toughness, and durability in the harshest of surroundings. You have to say it really looks the part and made light work of the challenges it was set on our test drive through deepest rural Herefordshire, taking in a challenging off-road course and ending with a delivery of potatoes to the Chase Distillery with which Land Rover enjoys a mutually beneficial association – well worth a visit if you are ever in the area. 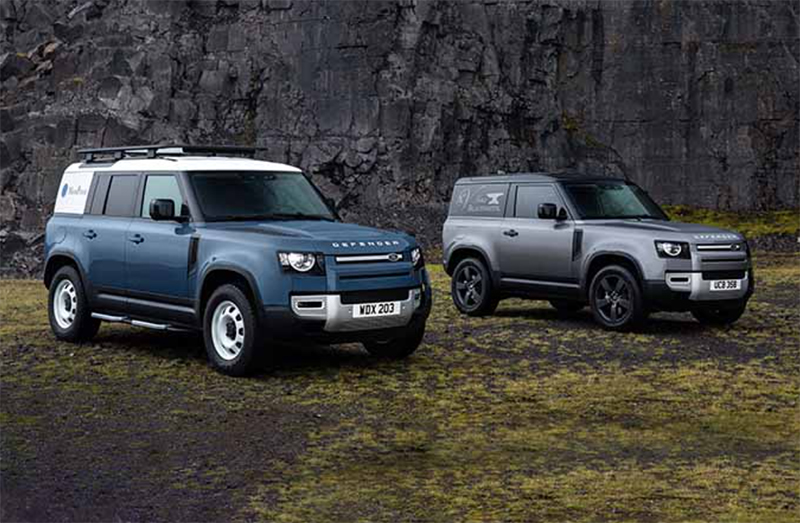 The Defender Hard Top comes in two body designs – 90 and 110. The interior combines a protected two-seat passenger compartment, with the option of a third central jump seat, and a flexible rear load bay that provides 1,335 and 2,059 litres of useable load space respectively and payloads of 670 and 800kg. Again, the powerful Ingenium D200, D250 or D300 in line six-cylinder engines are coupled with an eight-speed automatic transmission and intelligent all-wheel drive. The flexible load area features full rubber floor coverings, lashing points, hooks, lockable underfloor storage and a full bulkhead for security and safety. A clear sight rear camera (option) and 3D surround camera (standard) ensure maximum visibility around the whole vehicle, making light work of tight manoeuvres and off-road terrain which can see the Defender wade up to 900mm (more impressive than some well-known specialist pick-ups) and tow 3,500 kg with advanced tow assist technology.

Prices for the Hard Top start at around £36,000 plus VAT. No small potatoes, of course, but you really couldn’t choose to be in better company when the chips are down!