Button Fix is an ingenious secret fixing system for panels of all descriptions. It can be used to secure bath panels, WC panels, wall panelling and even shower panels. It is also used on fitted furniture. Of course, you could just get yourself a tube of panel adhesive, but the difference is that Button Fix allows removal of the panels if you need to gain access for servicing or even renewing damaged panels.

A good example might be the panelling around a bar. If it gets damaged or starts to look a bit tired or dated it can simply be lifted sharply up with some glass suckers to release it and then pulled away. The one proviso is that you need a 15mm clearance margin at the top to allow the panel to clear the fixing. It is a good system but what makes it even better are the different types of housings for the buttons.

If you are prepared to have a shadow gap behind the panels, you can use the surface mounted system that simply screws into the panel and the wall. If you want the panels to sit hard against the wall, you can use the flush hangers but these have to be set into the host material with a router. The Button Fix router jig isn’t cheap but it is well made and allows you to use either of the jig inserts to suit the type of Button Fix you are using. I would imagine anyone doing commercial fit out would not hesitate to buy the jig, but if you are just doing a one-off, you could make your own jig from MDF with a hole saw. The advantage of the Button Fix jig is that it is Perspex and this allows you to line it up precisely. 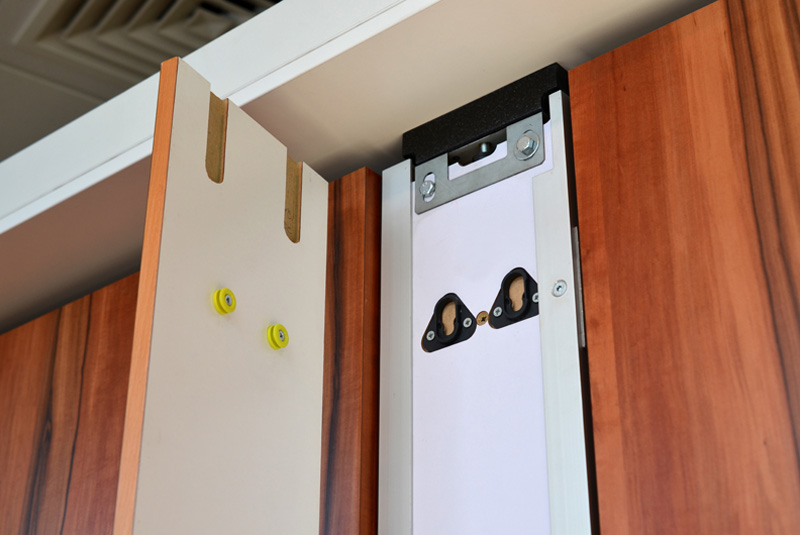 You might imagine that lining up the buttons and sockets also calls for some precise measuring but the locator pins make the job idiot proof. You simply prop your panel off the floor with some blocks and line it up level and plumb and give it a hard slap to make the tiny indents, just as you would with magnetic catches. I marked up the approximate positions with a pencil so I didn’t have to search too hard for the tiny dimples but they were well defined and easy to see. Having found them I used the indent to make a pilot hole for the screws for the buttons. The whole thing lined up like a lunar docking.

My favourite fixing in the range is the flush routed in fixing because it gives a really secure panel which isn’t wholly dependent on screws. The manufacturer says you can hang 200kg on four fixings. If you are anything like me, you will halve that figure because a lot of panels are made from dubious grades of chipboard and screws into chipboard are not the best thing so why take chances? The buttons themselves, however, are very strong. We get so used to plastic fixings being made of substandard material that snaps as soon as you look at it so it is good to see that the material used in this system is of the highest quality. I had a bit of a moment of doubt when I saw the cost of the hangers but I then realised that it was for a pack of 12 so they aren’t at all expensive.