Boilers across homes in Scotland are the most resilient when it comes to breaking down despite being home to the UK’s coldest temperatures, according to the results of a new study.

The 2020 UK Boiler Breakdown Study examined the amount of properties across the UK mainland and boiler breakdowns to establish the UK’s worst locations for boiler reliability. It found that just 1.79% of properties in Scotland reported problems with their boiler in 2019.

This comes despite the fact that average temperatures across Scotland are markedly lower when compared to the rest of the UK mainland.

The figures*, which have been compiled by Boiler Guide, found that properties in London experienced the largest amount of boiler-related problems over the course of last year with almost 3 in 100 experiencing problems. The West Midlands (2.75%) and the North East (2.42%) followed closest behind.

Northern regions of the UK fared well when compared to the rest of the UK when it came to reliability; behind Scotland was the North West (1.92%) and Yorkshire and the Humber (1.97%) which incidentally are also the softest water areas of the country.

The full results are as follows: 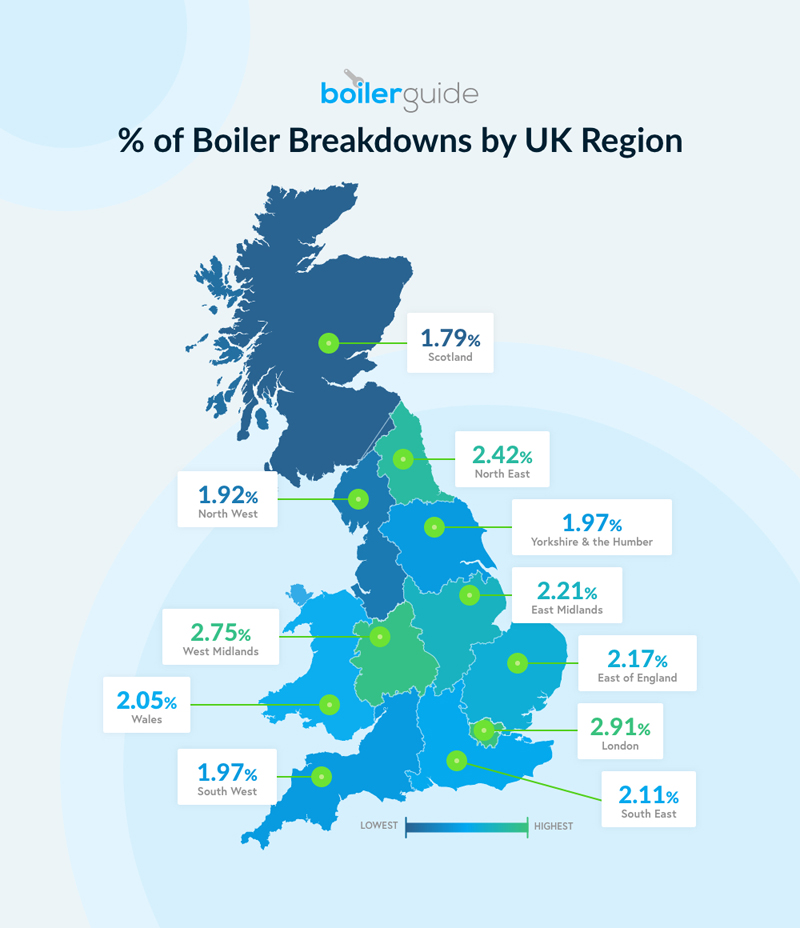 David Holmes, founder of Boiler Guide, said: “You would assume, due to its colder average temperatures, that boilers would be in significant demand across homes in Scotland so it is a bit of a surprise to see them top the rankings when it comes to reliability. Maybe those up North simply look after their boilers better or simply don’t have them turned on as much as further down south!

“However, when looking at areas towards the other end of the scale, London is synonymous with having an abundance of ‘older’ residential and commercial properties, with many containing older heating systems that are in dire need of repair. Coupled with the higher occupancy rates and the dense population of the region, the strain put on boilers and other home heating systems is hard to ignore.”

The report also found there was a clear link between hard water areas and the frequency of boilers breaking down, as well as links to the percentage of home ownership with areas dominated by rental properties such as in London, the North East and the West Midlands where homes are more likely to experience a breakdown.

Tony Jones, General Manager at Harvey Water Softeners, said: “While many people often refer to how the hardness of water can affect its taste, it’s actually the other implications of hard water on the home and to lives in general that are greater causes for concern.

“It’s troubling to think that just the water coming from our taps can cause so much damage to our home, but unfortunately the UK is fraught with aggressively hard water which causes a wealth of problems for our boilers.”

*Figures are based on the total amount of boiler repair enquiries received by Boiler Guide in 2019 and divided by the total number of properties in each region (based on ONS statistics).