PHPI’s James Moore speaks to Dominic Eves, owner of Swindon based Pure Boilers, to find out more about the boiler installation, servicing and repair company.

Starting out life as a small market town, Swindon saw a population boom in the early 19th century thanks to the development of two major canals. The investment saw the town flourish, and shortly after it became home to the repair works of Great Western Railway locomotives, as the UK moved from its reliance on water routes, to steam (or heat) powered rail.

A tenuous, but not too dissimilar journey to the one Dominic Eves has taken in the last seven years, in which he has moved from plumbing to heating. Having been made redundant when working for a previous plumbing firm due to the loss of a major contract, he set about the task of launching his own plumbing company, Aqua Tackler, back in 2010. However, last year Dominic decided to refocus the business, and, having already completed the necessary gas qualifications, now runs a boiler installation company.

As well as the standard boiler installations and repairs, the company also offers service plans for its customers. Starting at £5 a month for a basic annual boiler servicing plan, additional offers include unlimited 24 hour callouts, free parts and additional cover for accessories such as radiators, TRVs and pumps.

Passing down the baton 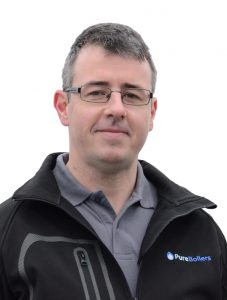 Pure Boilers now has three employees, including a full time apprentice, Sam, who is currently studying for his ACS qualifications. Dominic is in full support of apprenticeships, commenting: “Having gone through the apprenticeship process myself, I firmly believe it is key to the industry. As long as they are willing to work hard, they will be beneficial for the business, and it’s great to pass down the skills that I have learnt over the years to the next generation.”

Of course, adding an extra pair of hands isn’t always easy – with regard to both time and costs. As a way around the potential pitfalls of apprenticeship legislation, contracts and pensions, Dominic decided to outsource his HR needs. This, he says, enables him to concentrate on the business, which he is now able to oversee – with the two remaining employees able to cover a lot of the hands-on work. Whilst such a step back may not be for everyone, it is the side that Dominic says he enjoys, ensuring the business grows and keeping on top of paperwork, generating new business leads and marketing the benefits of the company’s service plans.

Marketing 101
With so many installation companies out there, some form of marketing strategy is vital to garnering new customer leads. Dominic is well aware of this: “We employ a number of marketing strategies in an attempt to promote the company and ensure local customers are aware of us.

“For Pure Boilers, the final piece in the business jigsaw is the customer retention that results from its service plans.”

“Simple things can make the difference – signwriting one of our vans, for example, has resulted in roughly six or seven direct leads. Having a clear, professional looking website is probably obvious, but it is important as most customers are likely to at the very least google you these days. This can give a really good impression of your company, and is why we’ve put a fair amount of time into our own.”

Dominic hasn’t stopped there, however. He also uses a PR company to support any case studies and promote the company via social media, whilst he asserts that keeping on top of reviews on lead-generating services such as Checkatrade has been crucial to growing the business. Indeed, at the time of writing, Pure Boilers has over 200 reviews on the Checkatrade site alone.

Building a business from scratch whilst working in the trade isn’t an easy thing to do, as many of you know. Long days can quickly turn to long nights, as the relevant paperwork is completed, invoices are sent, potential leads are followed up on – the list is endless. To support such a process, Dominic argues that his interaction with an entrepreneur’s networking group, BNI (Business Networking International) is an extremely useful resource.

“Through BNI, I’ve been able to network with a wide variety of individuals, some of whom I’ve enlisted direct help from. I decided to embark on the rebrand directly from discussions with members of the group, and I even found a designer to create our current website – something I simply don’t have the time to work on with everything else going on.” 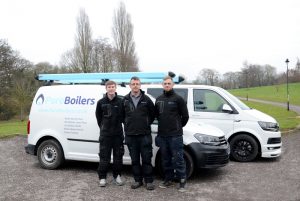 For Pure Boilers, the final piece in the business jigsaw is the customer retention that results from its service plans. It allows Dominic to keep in constant contact with current customers, whilst allowing the team to provide a continuously efficient service, ultimately ensuring everyone remains happy in the process.

Having taken the leap into the unknown back in 2010, Dominic is now reaping the rewards, as the company moves from job to job. There is a clear message from the owner that entrepreneurial networking groups such as the BNI can support business owners navigate potentially troublesome avenues. It is clear too, that Pure Boilers is benefiting from a dedicated marketing strategy, using all the resources at its disposal to support its local reputation and growth in Swindon and the surrounding areas.

0 0 0
Previous : The Skills Show is back
Next : Training course delivers business boost for plumber