Emitters have the power to make or break heating system efficiency, yet they’ve been completely overlooked by the current energy labels system. Mike Wright, Product Development Manager at QRL Radiator Group, calls for the industry to come together to make a change – and explains how this will boost whole heating system performance in the long run.

It’s fair to say that efficiency has been the one topic that’s dominated the heating industry in recent years. Whether it’s a fierce debate around the future of the RHI (Renewable Heat Incentive), or the quest to insulate before we generate, energy saving has rightly been the name of the game. Product specification has followed suit, with eco boilers and renewables leading the way – as governed by the EU’s ErP (Energy-related Products) Directive and its colour-coded energy labelling system, with efficiency bandings running from A+++ to G.

However, as we aim for A-rated efficiency, one element of the heating system has been seriously overlooked – and this is having an adverse effect on performance in homes and businesses. This product is, of course, the humble radiator.

Measuring efficiency
The ErP provides a framework for comparing efficiency across most heating system components – including boilers, heat pumps, micro CHP and hot water cylinders. Yet there is currently no requirement for manufacturers to produce an energy label for radiators, or for installers to include radiators when producing the package label that indicates the efficiency of the system as a whole. This is a huge oversight, and one that leaves many end users stuck with a system that costs too much to run, and has a much larger carbon footprint that it has to.

Whilst the future of the ErP remains unclear in the wake of the EU referendum, it’s likely that product energy labelling will continue in the UK in some form. As the discussion about product efficiency benchmarking develops, it’s high time radiators became part of the conversation.

Looking beneath the surface
The fact is that not all radiators are created equal. Whilst they might appear the same on the outside – particularly conventional panel radiators – in reality their efficiency varies greatly. Compared to the most modern, efficient models on the market today, older radiators have a poorer heat transfer rate, so they are larger and have more water to heat. Ultimately, this makes for slower heat-up, higher energy use and a larger carbon footprint.

This is where proper energy labelling would be particularly beneficial: making it straightforward to pit one product against another, and specify emitters that will improve performance, cut costs and reduce emissions. But what are the traits that would set an A-rated radiator apart?

The evolution of efficiency
Technically speaking, radiator efficiency boils down to waterway pitch (the distance between the vertical water channels), and convector fins. Put simply, the narrower the pitch and the more fins there are, the lower the water content, the faster the heat transfer, and the better the efficiency.

In the early days of central heating, radiators had a wide pitch (40 to 54mm) and no convection fins, so their heat transfer and efficiency was very poor. These can be categorised as ‘first generation’ radiators. They were succeeded by generation 1a models in the 1970s, with the addition of ‘M’-shaped convection fins and projection back-welded connections to marginally improve efficiency.

The majority of radiators made today are second-generation. Developed in the 1980s, these have a reduced 33.33mm pitch and waterway-welded fins – but their efficiency still lags far behind the most recent models.

Third-generation radiators were developed in the UK by QRL engineers. They have the smallest, 25mm pitch and the most fins. This makes for the lowest water content, fastest heat-up time and best efficiency. In fact, as the only radiator to be verified by the Energy Saving Trust, QRL’s flagship third-generation T22 Compact offers the highest heat output (for both size (W/m2) and weight (W/kg) of any radiator available (testing carried out for the QRL Type T22 Compact radiator [600 by 1000mm double convector.] Correct as of May 2016). 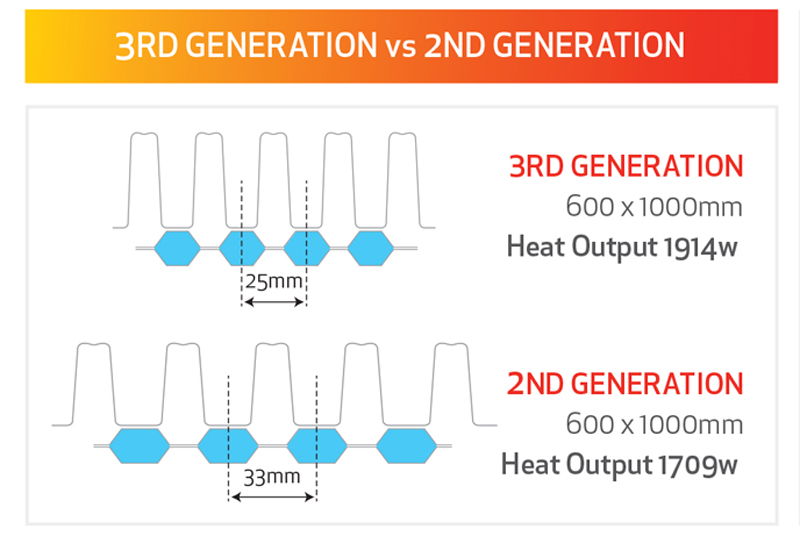 Time for change
With such large discrepancies between performance and efficiency, the benefits of introducing energy labels for radiators become obvious. The highest-rated models will deliver more heat, faster. Rooms will reach the desired temperature quickly and the heat source won’t have to work as hard. The most efficient radiators also work more effectively at lower Delta Ts, which makes them the ideal partner for renewables. All of this translates into real energy and money savings for end users.

Don’t Omit Emitters
For radiators to get the attention they deserve, the industry needs to come together and make itself heard. With this in mind, here at QRL we have launched Don’t Omit Emitters: a campaign petitioning the government to introduce a proper efficiency ratings system for radiators. To find out more or to lend your support, visit qrl-radiators.com/petition