While it’s easy to see the installation of a flue as straightforward when installing a condensing boiler, there are a number of considerations that can often be overlooked. Graham Collins, Training Support Manager at Baxi Heating, discusses the need to give flue siting and sizing as much attention as the installation of the boiler itself.

In 2005, Part L of the Building Regulations was changed to mandate that gas-fired boilers fitted beyond this date must have a minimum efficiency of 86%. This resulted in the introduction of condensing boilers. With condensing boilers emitting a plume of condensate, it was almost an inevitability that the revisions to Part L would bring an increased importance to the location of the flue terminal.

Nuisance pluming
A major consideration for any heating engineer is the siting of the flue terminal to prevent it from causing a nuisance to neighbours. BS5440-1 states that the flue from a condensing boiler should not be installed where it is likely to cause a nuisance. This could be the condensate cloud exiting a boiler flue terminal across a neighbouring driveway or pluming above a pavement.

While manufacturers provide detailed guidance on permissible lengths of the flue and BS5440 Part 1 gives minimum clearances for flue terminal siting, every installation is different. Therefore, installers should always pay close attention to the siting of the flue terminal to avoid putting the homeowner in the unenviable position of having to get the nuisance flue re-sited.

Options are available to installers when re-siting the flue is not a viable option. Flue accessories, such as plume displacement kits and plume deflectors, can be used to point the pluming away from the area that it is likely to cause an issue.

All about length
At current, a production Baxi, Main or Potterton system or combi boiler with a 60/100mm concentric flue fitted, can be up to a maximum length of 10m. For those installations that require the flue run to be longer, the flue size can be increased to 80/125mm, providing a maximum flue length of up to 20m.

The choice and siting of any boiler will be affected by the permissible maximum equivalent length of the flue. Calculating the equivalent flue length is a straightforward process. Installers simply have to remember that for current production Baxi, Main or Potterton boilers the first elbow on a concentric flue is free. From there, they will need to make a one metre reduction for each 90-degree bend and a half metre reduction for every 45-degree bend.

Should the decision be made by an installer to operate the boiler with a flue that exceeds the maximum length, then the boiler may not function as it should. For instance, the installer may find that the ignition is delayed and the combustion is affected, which could result in serious damage to the boiler.

Just as a boiler must be properly hung and supported on a homeowner’s wall, the flue also requires adequate support. BS5440 requires that installed flues are supported throughout their entire length and Baxi specifies that they are supported at least once every metre. Without the required support, a horizontal flue-run may dip, leading to an accumulation of condensate water in the flue pipework which could prevent the boiler from properly functioning.

Manufacturers provide installers with a means of complying with these requirements. For instance, all Baxi Multifit flue components are supplied with support brackets where necessary, meaning there really is no reason not to comply.

Site it right
There are a number of siting considerations that must be made when installing a flue to prevent the products of combustion from entering a homeowner’s property or that of their neighbours.

For instance, horizontal flues that are installed adjacent to an opening window must be installed with a minimum distance of 300mm between the window and the flue terminal. Importantly, though sometimes overlooked, if a plume displacement kit is utilised the flue terminal air intake can be sited a minimum of 150cm from an opening window or door. To avoid causing a nuisance or putting neighbouring homeowners at risk, the distance from a fanned draught appliance terminal installed next to the boundary line must not be less than 300mm. However, the use of a plume deflector can reduce this minimum to 25mm.

Flue installations do not always receive the consideration that they need. Installers must take the time to familiarise themselves with the right technical knowledge to ensure that the flue is installed safely and in compliance with industry standards. 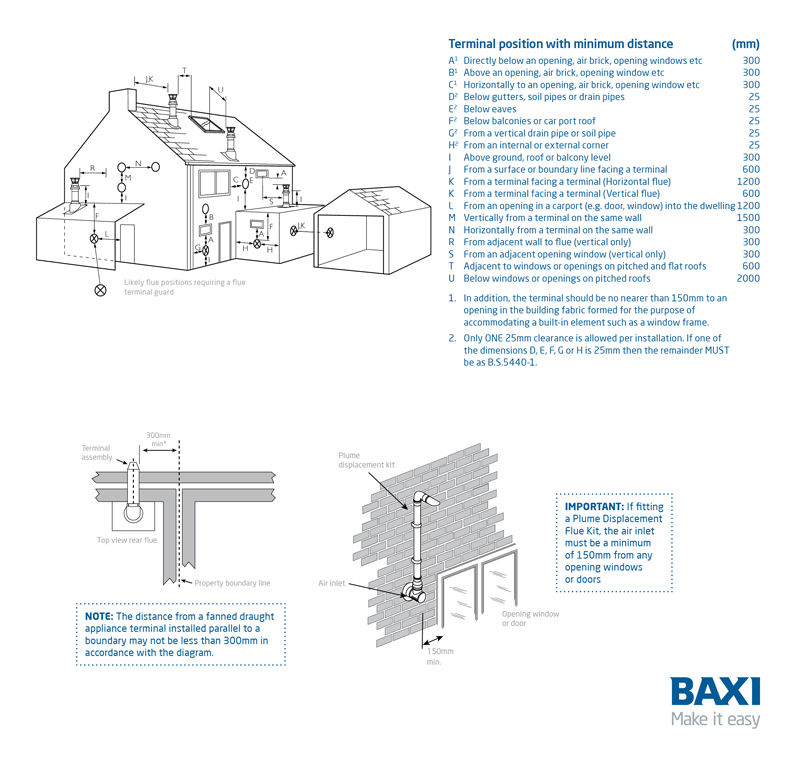