The task for each of the players was to complete a lap of the specially-designed 4×4 course, with their other team member reaching out of the window to touch two flags laid out around the track. Each team would then swap drivers, and touch the remaining two flags; the team who completed the course with the best driving technique, ability, skill and control would be crowned the winner, as judged by a professional driving instructor.

Whilst Team Football certainly appeared to make their way around the course fastest, the superior driving technique and lack of fouls for missing flags by Team Rugby meant they walked away victorious as the Fiat Professional 4×4 Challenge champions.

Commenting on the challenge, the victorious former Welsh and British & Irish Lions Fullback Lee Byrne said: “We were pretty chuffed to beat the football boys in the 4×4 driving challenge. It was a really enjoyable test of driving skills – though they may have been quicker around the course, particularly Danny who drove like a maniac, I’m glad the judges recognised our superior technique.”

Former Celtic and Scotland defender Jackie McNamara commented: “We’re obviously disappointed to have lost out today after our earlier victory in the Fullback Challenge. Whilst the challenge was great fun and very different to a usual day at work, maybe going full throttle round the course wasn’t the best idea!” 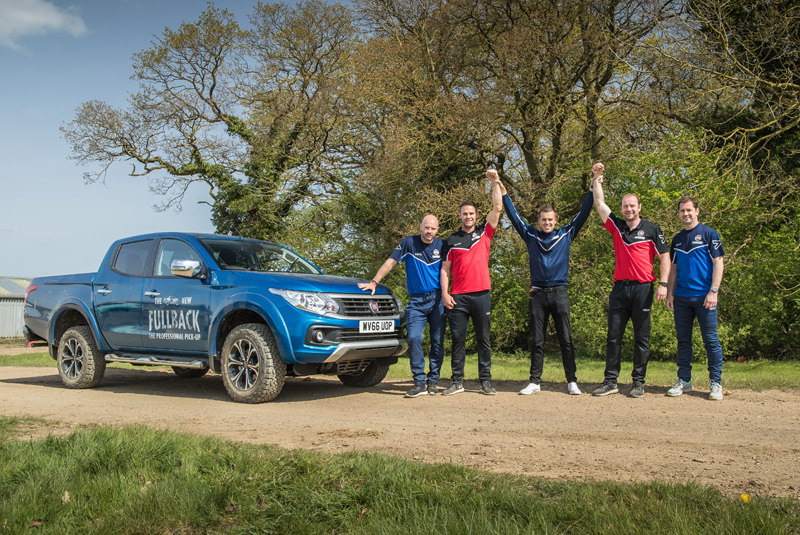 With the new Fullback, Fiat Professional has entered the buoyant medium-duty pick up segment which accounts for 650,000 vehicles a year in the EMEA (Europe, Middle East and Africa) region. Engineered to meet the broad needs of business users – both professional and recreational – the Fiat Professional Fullback is said to offer high levels of flexibility and dependability. The front of the vehicle adopts the upmarket appearance of a sports SUV while distinctive swage lines along the flanks tie the front of the pick-up to the rear, integrating the load bed as part of the vehicle’s overall design.