Fuel poverty remains high on the industry agenda, with the latest statistics showing an increase in the number of people unable to afford to heat their homes. However, the latest heating systems don’t just save energy, they can also save money by lowering fuel bills. Mustafa Findik, Managing Director at Ariston, explains how modern boilers and heating controls can make a vital contribution to combatting fuel poverty.

According to the Government paper “Cutting the cost of keeping warm: A fuel poverty strategy for England”, fuel poverty is now indicated by a ‘low income, high costs’ model. This is where a household is deemed fuel poor if it has an income below the poverty line (including if meeting its required energy bill would push it below the poverty line), and has higher than typical energy costs. This replaces the previous ‘10% indicator’, which considered a household to be fuel poor if it had to spend more than 10% of income on fuel to maintain an adequate standard of warmth.

Now, the latest figures (published in 2015) state the number of households in fuel poverty in England currently stands at 2.35 million – that’s 10.4% of the population. People are actually turning off their heating rather than face rising energy bills, which clearly has health implications – living in cold temperatures can result in cardiovascular and respiratory problems, as well as depression.

Prior to Fuel Poverty Awareness Day earlier this year, the HHIC identified that households “often waste a huge amount of energy and money trying to heat and power their inefficient homes.” The Association proposed replacing the “9 million inefficient boilers in UK homes” and installing “proper heating controls” in order to drastically reduce household energy bills and fight against fuel poverty.

Undoubtedly, embracing the latest heating technology makes perfect sense, as utilising energy efficient, condensing boilers will use less gas – which will, in turn, lower fuel bills. Indeed, replacing an old G-rated boiler with a newer, high efficiency condensing model can result in annual savings of up to £310, according to the Energy Saving Trust (EST).

In addition, suitable controls (or “proper heating controls”, according to the HHIC) should also be used alongside condensing boilers, as these technologies have become an integral part of energy efficient systems. While it is common for older properties to have the basic on/off switching technology which came with the original boiler, this doesn’t eliminate fluctuations in room temperatures and can actually impact on efficiency. Modulating room thermostats, however, offer the opposite – these can adjust boiler outputs to within 0.1°C of a set level, flattening peaks and troughs in the system. Plus, they also prevent the heating system from firing unnecessarily – such as during times when a property is empty.

Furthermore, without a room thermostat, some boilers will cycle continuously; this not only wastes fuel and increases costs, but also causes additional wear and tear on the appliance. That’s why it’s important for installers to ensure customers have efficient controls fitted alongside the latest boiler, while emphasising that lowering room thermostat temperatures by 1°C can result in savings of up to 10% on heating bills, as detailed by the EST.

The effectiveness of room thermostats can be enhanced further by using them alongside other devices, such as wireless controls, for example. These can be fitted practically anywhere in the home, making long wiring runs a thing of the past. This also ensures a simple method of installation, with minimal disruption and expenditure for occupants. 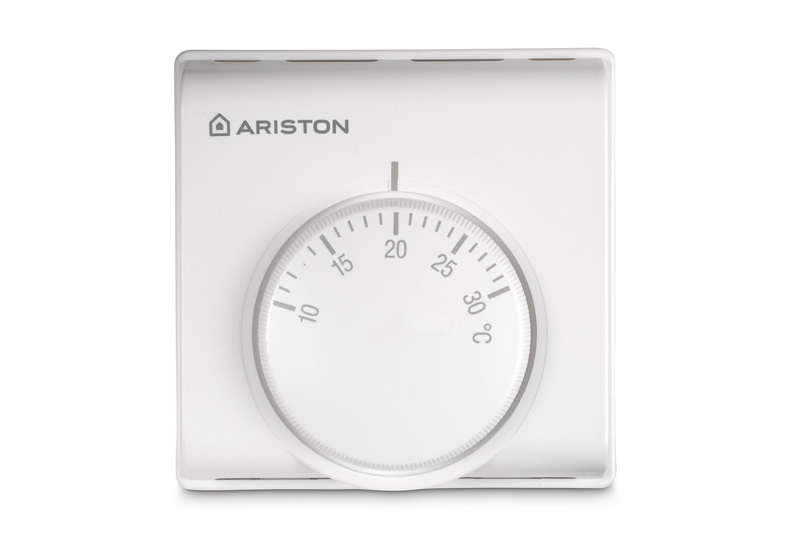 Other controls can also be added to bolster boiler and system efficiency further. For instance, an outdoor sensor supplies an additional line of system data for more accurate adjustments. So, if the outside temperature rises, the sensor informs the boiler, which responds by adjusting the system flow temperature accordingly; this reduces energy consumption, as well as running costs.

Advances in mobile technology have also seen a rise in the use of ‘smart’ controls, which allow homeowners to manage and operate their heating systems remotely, via apps on their smartphones and tablets. These controls continually monitor the main settings of the boiler, while allowing users to set their ideal temperature at home and manage their energy use. Incidentally, Ariston has recently launched its own app, “Ariston Net”, which offers such benefits.

These apps can offer cost saving benefits by ensuring heating systems are only operated when the heat is required, although it should be noted any cost savings ultimately lie with the end user; for example, if they keep switching the heating on earlier (which means it is effectively on for longer) each day, more energy will actually be used than saved.

The HHIC’s summary that “heat and warmth must not be considered a luxury” was very apt. The industry can play its part in bringing this statement to fruition by continuing to educate people about the environmental and economic benefits of the latest boilers and controls. Installers also need to continue to recommend the most efficient options available and upgrade any antiquated and expensive to run systems. This would benefit everyone both in terms of preventing fuel poverty and also reducing carbon emissions.