Thousands of people have turned to Tinder in the hunt for a partner. But how do you get the most matches? A study has revealed that adding your profession to your profile can increase your chances of a tinder match. But what about the trades? Showerstoyou.co.uk has investigated whether adding a trade job into your profile would increase your chances of a right swipe, and if so, which type of trade would make you most attractive.

To do this, Showerstoyou.co.uk created male Tinder profiles, ensuring the name and picture remained unchanged, with only the bio changing to each different job. Each profile was left online for two days, swiping right to a total of 200 people.

The results
On average, male profiles that did not have a trade job in their bio received 60 matches over the course of two days. However, by adding a trade job into their profile, those matches increased to as many as 111. On average, a male in the trades received 80.6 matches in two days.

The job that got the most matches was a builder, with a whopping 111 matches, nearly double the amount the profile received without a trade job in the bio (60). This was shortly followed by plumbers, gaining 101 matches. One study investigating why women might be more attracted to men working in the trades found that it instantly made them more “masculine.” 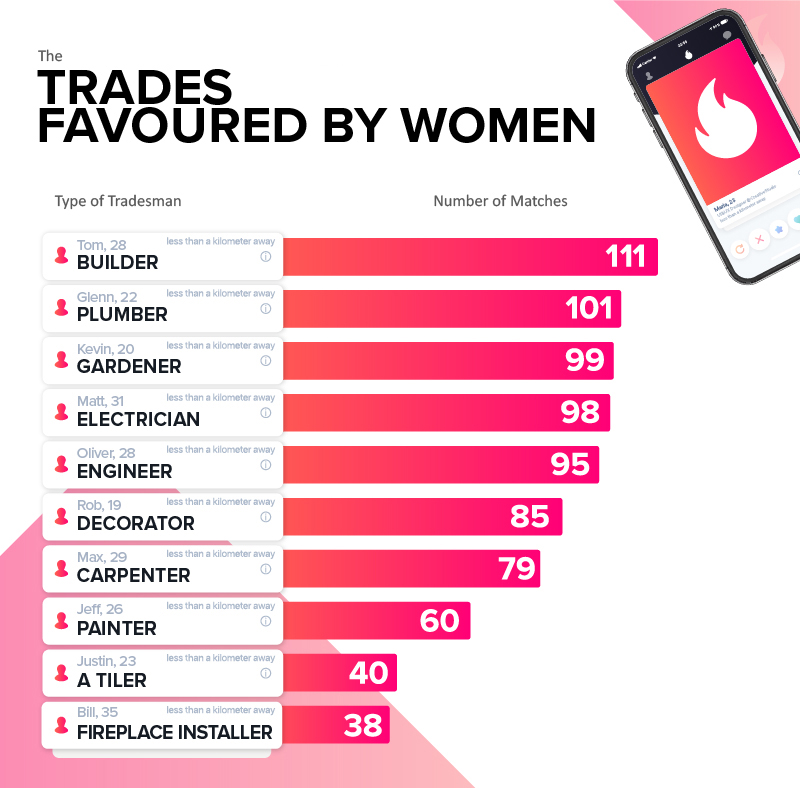 0 0 0 0
Previous : PRODUCT FOCUS: PLANO pouches
Next : Do you know someone who needs help from Band of Builders?


Error: API requests are being delayed for this account. New posts will not be retrieved.