Ryan Mills has been looking after the heating and plumbing needs of the residents at an Edinburgh sheltered housing scheme for a number of years.

In that time he has upgraded the hot water systems in around 40 of the 120 flats. He’s also seen the pipework jointing method of choice switch from traditional brazing, with its gas bottles and torches, to flame-free press.

That’s particularly significant for this project, as the residential apartment block for people aged 65 and over is fitted with dozens of smoke alarms in the main corridors and in the individual flats.

A burst of flame or whiff of smoke while completing a joint and alarms would go off, alerting first the scheme’s warden and then, shortly after, the local fire service.

Ryan, from G D Mills Plumbing & Heating, said: “There would be a big risk of triggering an alarm if I were using a blow torch in there. As the building is linked to the fire station, any hot works are out of the question.”

Instead, he used Conex Bänninger’s >B< Press copper press fittings for the latest installation, in which he replaced a gravity fed hot water system with a more effective and more efficient unvented one.

More beneficial
>B< Press fittings feature a high quality EPDM O-ring that forms a secure, leak free joint when pressed. The system has the advantage of a three-point press, one press either side of the bead and a third compressing the O-ring.

The fittings also have a leak-before-press feature (available for sizes 12-54mm) that is designed to leak at low pressures (from 0.1 to 0.6 bar) when the system is tested, alerting the installer to any unpressed joints. It means there is no need to go to full test pressure.

On this latest installation, Ryan said: “When the flats were fitted out in the 1980s they all had gravity fed cold and hot water tanks to fill a bath. These days it is thought more beneficial for the elderly to have a walk-in shower.

“In upgrading the system I’ve taken out the old enormous gravity fed cylinder and replaced it with an unvented 15 litre one.

“As the system’s now got mains pressure behind it there’s a much stronger flow, instead of a trickle. Also, as the owner only has to heat up 15 litres of water instead of about 100 times that the electricity bill is cut hugely. 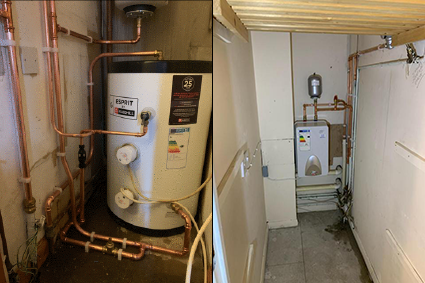 Much quicker
“For me, press makes the job so much faster. Not only is it quicker to get the water back on, I also have to carry less up and down the stairs.

“To press, I only need a press tool and the right jaws, compared with the flux, solder, gas, heat mat, damp cloths and other materials that I would need for brazing.”

Ryan said that for the first few refits he did in the four-storey building, press wasn’t around and he had to use the brazing method.

“Back then I did solder but I had to bag-off the smoke alarms and squash into the cupboard and keep the door closed while I brazed for fear of setting of an alarm. It was far from ideal,” he said.

“I then had to wait 10 to 15 minutes while each soldered joint cooled before I could move onto the next one.

“For one installation it used to take a full day. Now with press I can do the same job in four or five hours. And while there’s an outlay for the press tool, you soon make it back up again because of the speed and increased productivity.”

0 0 0 0
Previous : Coronavirus Statutory Sick Pay Scheme to launch on May 26th
Next : Plumbing lecturer’s creative ‘thank you’ to the NHS