As any prospective inventor will know, successfully bringing a product to market requires huge levels of determination, industry and labour, qualities that were forged in Michael Sebhatu in one of the bloodiest and longest running conflicts of modern times. The Eritrean-born tradesman who’s behind the Quadsaw first began to develop his time-saving tool for cutting socket boxes when working as a kitchen fitter in the UK, but the story begins much earlier, in the Horn of Africa. “I actually came up with the idea for the Quadsaw eight years ago, so it’s been a long road to get where we are now,” explains Michael. But that’s a passage in time which is nothing compared to his own journey.

In a society where only subsistence farming stands between survival and starvation, necessity really is the mother of invention, and it was that stark schooling that would first shape Michael’s resourcefulness and resolve. “My father was always trying to improve his working methods, and tinkering with machines became a way of life for us, so it was something that I was fascinated by from an early age. That was the inspiration for my interest in engineering and it’s why I have studied it both in Africa and in this country – that’s why I was so confident I could realise the Quadsaw concept.”

Even in the context of a continent that has been all too often scarred by conflict, the cruelty and futility of the 20-year war between Ethiopia and Eritrea is remarkable for its ferocity. Despite the continuing intensification of hostilities, Michael was attend school in Asmara, and would subsequently escape his ravaged homeland to join his brother in Ethiopia, where he was already running a successful engineering business. “The long war reduced my country to ashes and the only thing we could do was leave,” recalls Michael. But his adopted home would not prove to be the safe haven he had hoped. “It was in Ethiopia that I would become a fully qualified engineer, but that country also had national service, and when I came of age I got the call up. Returning to Eritrea as a soldier, and fighting my own people, was not something I could reconcile so I had no choice but to flee once again.”

The inspiration for Quadsaw
Michael set out on the long journey by foot to Kenya but the authorities there, already struggling to cope with an escalating refugee crisis, refused to take him in. After a year evading deportation, he was then able to raise the considerable sums for a passage to England, where he would successfully claim asylum, and continued to study engineering, and also gained a Masters in product development. “Eventually, I settled into kitchen design and fitting, installing some pretty high spec units in and around the London area, and it was when pursuing this trade that the spark for the Quadsaw would be lit.”

Any tradesperson will confess that there are those regular jobs on site that just don’t feel right – they just take too long or you’re never quite happy with the finish. For Michael, cutting socket boxes was certainly in that category and he always felt that there could be a better way. Given the 51-year-old’s engineering background, he was in a position to do something about it.

“I was actually on a very expensive converted barn property, where the electrician was using a pad saw to cut through the plaster. It was a method that was at odds with the quality of the workmanship on the project as a whole and, watching him just hack away at it, my first thought was why not use a tool that cuts square? It was then that I set about designing one. Of course, when you’re working full time, it’s not easy to devote whatever spare hours you might have, and eventually it became clear that if I was going to develop a workable solution I would need to exclusively dedicate myself to the Quadsaw, and that’s what I’ve done. Once I had a prototype, and could prove that it was a viable product, we could attract investment and move to manufacturing.”

What Michael would ultimately design would be an attachment to a drill with a 13mm chuck which, using patented technology, converts the power tool’s circular motion into a linear one, that cuts in four planes at once. The set of six blades supplied with the tool means you can easily switch between cutting single (75 x 75mm) and double (75 x 15mm) socket boxes and, because it cuts to a prescribed depth, the chances of inadvertently cutting concealed wires or pipes are greatly reduced. The real advantage, of course, is the quality of the finish. Because there’s no need to hide the mess you may have made with a saw, a clean and accurate cut means you can fit light switches and sockets that sit flush with the wall – there’s no more making good and greatly reduced snagging.

“It’s about getting the kind of result that the job as a whole deserves,” says Michael, “but it’s also about time. That’s why the blades can be very quickly changed simply by pressing a button and releasing the blade – it literally takes seconds. At every stage of the design we’ve ensured that user friendliness is paramount and, because you’re not producing ragged holes, it also limits dust. It’s a tool that’s been developed by someone with specific experience of the problem that it solves – and that’s why it will find its way into the toolbox of a whole range of tradespeople.” 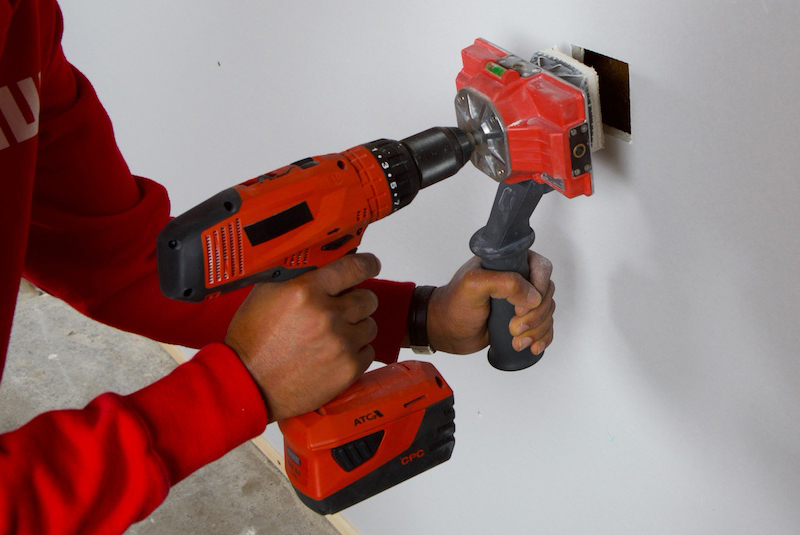